30 Oct The Register: From markets to supermarkets

Posted at 12:08h in Uncategorized by Assistant 0 Comments

Not only are Forty Thieves nut butters locally made and nutrient-dense, but there’s also an inspiring story behind the brand and its owners, Shyr and Brent Godfrey. Stocked in over 400+ retailers nationwide including New World, PAK’nSAVE and Countdown supermarkets, here’s how the legend of Forty Thieves began. 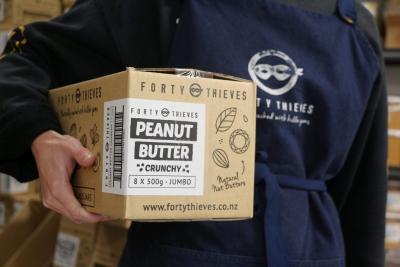 “In 2016 Shyr and Brent started small, selling their Forty Thieves nut butters through local markets and online. The pair would split up and attend up to four markets every weekend: one each on Saturday, one each on Sunday.

Shyr explains “this was a great way to get direct feedback about our products, what was and wasn’t working as well as what customers were looking for that we didn’t already offer.”

Importantly, these markets also allowed Shyr and Brent to develop relationships with their customers and share their brand story and values. “Very quickly we developed a very loyal customer base that would visit us every week to buy our products”, Shyr says.

Forty Thieves then expanded into retail via Farro Fresh. Continuing their hard work ethic, Shyr and Brent conducted many tastings in Farro’s stores around Auckland to try and get their products in as many hands as possible. This perseverance paid off: within a few months of being ranged, they won their first award for ‘Most Delicious Product at Farro Fresh – People’s Choice’.

Continually, Shyr and Brent were able to expand their retail offering while still attending markets, focusing on independent stores and supermarkets, growing their base to around 50 stores.

It was in 2017, one year after launching, that Shyr and Brent began supplying New World stores, personally visiting each New World in Auckland and meeting with the store buyers. Shyr says “we’d share our story and bring a selection of products for them to try. Sometimes it would 3-5 follow-up calls, emails and visits and we’d always offer to help cut the product onto the shelf ourselves.””