19 May Local Matters: Awards for a local nut business

Posted at 11:18h in Featured by Assistant 0 Comments

These are challenging times for small businesses, which made the good news received by a local nut butter maker recently all the more valuable. 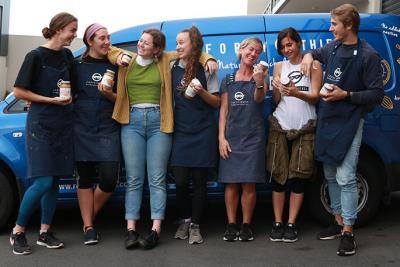 Forty Thieves Nut Butters is a family business started by Shyr and Brent Godfrey almost four years ago. The couple began by producing everything themselves and selling at Farmers Markets.

They now employ a team of 10 in their Stanmore Bay factory and sell their 12 products through over 250 stores nationwide. They export a small quantity to the US and recently sent their first shipment to China.

Early this year they entered the Outstanding NZ Food Producer Awards and, while in lockdown on April 21, received the news that they had won four medals – a gold for Chai Spiced Almond with Fruit Pieces; two silvers for Peanut Butter Crunchy and Scorched Almond with Organic Cocoa; and a bronze for Almond Butter Crunchy.

Each year the judges of these awards, which this year included food writer and cookbook editor Lauraine Jacobs and NZ cook Allyson Gofton, assess around 200 products. As well as quality, judging criteria include sustainability and originality.

Forty Thieves has won a number of other awards already, including a gold medal at the 2018 Outstanding Food Producer Awards, and a bronze at the 2018 NZ Chocolate Awards.

However, Shyr says this year’s win was particularly good news, given the lockdown.

“It shows that local businesses should not lose hope and are still seeing success despite the pandemic,” she says.